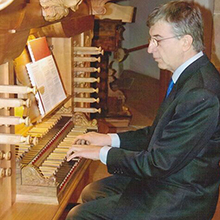 Virtuoso organist and renowned improviser Edoardo Bellotti performs at significant festivals and concert venues throughout the world. He is considered a leading expert in the performance of renaissance and baroque keyboard music. He has made several critically acclaimed recordings on historical instruments, including Promenade (Loft Recordings), a recording of organ repertoire and original improvisations on the Eastman School of Music’s Italian Baroque Organ at the Memorial Art Gallery in Rochester, an instrument that he inaugurated in 2005. He is currently collaborating in a project of new organ music and visual art in Milan, in conjunction with the art installation of the American minimalist Dan Flavin. He has performed the complete works of César Franck, and has worked with orchestras in Italy and abroad, performing a wide spectrum of repertoire, including the Italian premiere of Satyagraha by Philip Glass.

Professor Bellotti combines his international performing career with musicological research and teaching, publishing articles as well as new critical editions of music of the seventeenth and eighteenth centuries. He is a frequent guest lecturer at international conferences, and has served as consultant for the restoration of various historic organs. He has extensive teaching experience in several musical institutions and universities including the Conservatory of Trossingen and the University of Bremen in Germany, the University of Udine and the Conservatory of Trento in Italy. He has served on the juries of international organ competitions and has given master-classes and seminars in the US, Canada, Europe, Japan and Korea. In September 2013, he joined the Eastman School of Music faculty as Associate Professor of Organ, Harpsichord and Improvisation.

Hans-Ola Ericsson is one of the exceptional figures on the international music scene, distinguishing himself both as performer and composer. He excels in a wide range of styles, from early to contemporary music, always looking to infuse his playing with historically informed practices. No other organist in the last decade has played as many contemporary work premieres as Ericsson; he has worked closely with John Cage, György Ligeti and Olivier Messiaen to better understand their artistic visions. As a post-avant-garde composer, Ericsson blends existing sound material with the unheard in his works. This technique can be observed in his organ mass, relating the sounds of Arp Schnitger organs. He was referred to as the prototypical organist of the twenty-first century, his music displaying versatility focused on every sound and on its compositional context.

In 1989, Hans-Ola Ericsson was appointed Professor at the Academy of Music in Piteå and at the University of Luleå. In 1996, he was appointed Visiting Professor at the University of the Arts Bremen and in 2011, Professor of Organ at the Schulich School of Music at McGill University in Montreal, Canada. Today, he is in high demand as a concert organist, a composer, a teacher and a consultant for organ restoration work. He has worked namely to restore an organ dating back to the seventeenth century sitting in the German Church in Stockholm. His interpretations are well documented on numerous recordings, including the recording of Olivier Messiaen’s complete organ works.