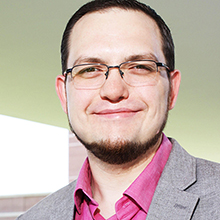 Daryl Robinson has earned critical acclaim as a solo and collaborative artist, praised for his compelling performances, and unique depth of interpretative skill. Described as a performer with “…a driving muscular poetry underpinned by nimble technique and nuanced sense of style…”by the London-based Choir and Organ Magazine, Daryl was winner of both First Prize and Audience Prize at the 2012 American Guild of Organists National Young Artist Competition. At the age of thirty, he was appointed Assistant Professor of Organ at Westminster Choir College of Rider University in Princeton, New Jersey, beginning Fall of 2015.

Daryl’s debut solo album, Sempre Organo, was released in 2013 on the ProOrgano Records label and quickly garnered rave reviews in the United States, Canada, France, and England. Selections from the disc have been heard on nationally syndicated radio programs, including Pipedreams® and With Heart and Voice. Daryl is represented by Karen McFarlane Artists, Inc. Further information can be found at: www.darylrobinson.com.