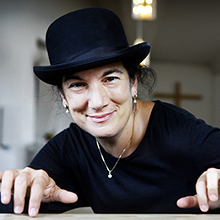 Dorothy Papadakos is a member of the seven-time Grammy Award winning Paul Winter Consort. She came to international attention as the first woman organist of the world’s largest gothic cathedral, the Cathedral Church of St. John the Divine in New York City (1990-2003). A graduate of The Juilliard School and Barnard College, she is also a published composer and playwright. Her musical BACCHUSsmashed box office records in its acclaimed world premiere in North Carolina and is now in development for a new production. Dorothy is a renowned international performer and improviser, known for her annual Halloween Tours of silent horror films spooking sold out audiences across America (Phantom of the Opera, Nosferatu, Dr. Jekyll & Mr. Hyde, and Hunchback of Notre Dame.) Her hero is Charlie Chaplin and she equates accompanying his films to playing Duruflé . . . a supreme technical challenge that’s emotionally thrilling. Recent new works include Toccatalina! for organ solo, her play If I were a Rothschild, and the screenplay Hitchhike to Heaven, a new musical and TV drama. Please visit www.dorothypapadakos.com.

Accompanied at the Organ by Dorothy Papadakos