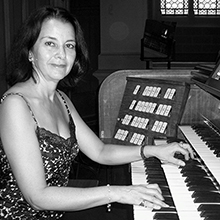 Marie-Bernadette Dufourcet was born in Bayonne (French Pyrenees, Basque-Gascon area) and married Lebanese-born composerNaji Hakimin 1980. She earned her doctorate from the Sorbonne. She is Professor at the University of Bordeaux Montaigne where since 1992 she has taught music history and analysis, and has been successively director of the music department, Director of the Arts UFR, and Dean of Humanities. She is a visiting professor at the Universidad Autónoma (Music Department) in Madrid. She studied organ with Susan Landale, Marie-Claire Alain, and Jean Langlais, and later studied at the Conservatoire National Supérieur de Musique in Paris in the class of Rolande Falcinelli. There she won first prizes in organ, improvisation, harmony, and counterpoint, and second prizes in fugue, instrumentation, and orchestration. She is a Licentiate performer of Trinity College of Music in London (LTCL). Dr. Dufourcet won first prize at international organ and improvisation competitions in Rennes (France), St. Albans (Great Britain), Beauvais (France), and the second Grand Prix d'interprétation in Chartres (France). She is the honorary titulaire of the Cavaillé-Coll organ of Notre-Dame-des-Champs Church in Paris. Her repertoire includes music from the Baroque to the present day, as her discography and broadcasts reveal.

As a musicologist, she writes articles and books on organ and court music in France and Spain from the sixteenth to the seventeenth centuries. She is now at the head of an important research project in Aquitaine concerning dynastic alliances between France and Spain from the sixteenth to the eighteenth centuries, and their consequences on politics, economy, and culture. She regularly organizes international and transdisciplinary congresses in Bordeaux. For her academic accomplishments, she received the medal of “Chevalier des Palmes Académiques” in 2010 and the medal of “Chevalier de l’Ordre National du Mérite” in 2012.

Naji Subhy Paul Irénée Hakim was born in Beirut. He studied with J. Langlais and at the Conservatoire National Supérieur de Musique de Paris - classes of R. Boutry, J.-C. Henry, M. Bitsch, R. Falcinelli, J. Castérède and S. Nigg, where he was awarded seven first prizes. He is a licentiate teacher in organ from Trinity College of Music in London and won ten first prizes at international organ and composition competitions. In 1991 he was awarded the Prix André Caplet from the Académie des Beaux-Arts.

At first Organist of the Basilique du Sacré-Coeur, Paris from 1985 until 1993, he then became Organist of l'église de la Trinité, in succession to Olivier Messiaen, from 1993 until 2008. He is Professor of Musical Analysis at the Conservatoire National de Région de Boulogne-Billancourt, and Visiting Professor at the Royal Academy of Music, London.

He is a graduate of the École Nationale Supérieure des Télécommunications in Paris, member of the Consociatio Internationalis Musicae Sacrae in Rome and Doctor honoris causa of the Pontifical University Saint-Esprit of Kaslik, Lebanon . In 2007, His Holiness Pope Benediktus XVI awarded Naji Hakim the Augustae crucis insigne pro Ecclesia et Pontifice, for his excellent commitment and work for the benefit of the Church and the Holy Father.