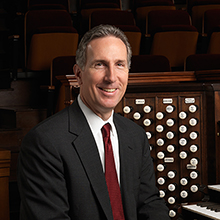 Prior to his appointment as a tabernacle organist in 1991, Dr. Elliott was an assistant professor of organ at Brigham Young University. From 1978 to 1981 he served as an assistant organist to Keith Chapman at the Wanamaker Organ in Philadelphia. A Fellow of the AGO, he has been a performer at national and regional conventions of the guild. He has performed extensively as a recitalist in North America, and has also played recitals in Europe and Israel.

A native of Baltimore, MD, Dr. Elliott received his early musical training at the Peabody Conservatory and the Catholic University of America. He received a Bachelor of Music degree from the Curtis Institute of Music, and Master of Music and Doctor of Musical Arts degrees from the Eastman School of Music. His organ teachers have included David Craighead, Dale Krider, William Watkins, and John Weaver.

Eric Ewazen's music has been performed by distinguished soloists, chamber ensembles, vocalists, wind ensembles and orchestras around the world. His music can be heard on some 70 commercially released CDs, by artists including performers from the New Yrok Philharmonic, Chicago Symphony, and other notable orchestras. His compositions for brass, percussion, woodwinds and wind ensembles have become staples of the repertoire. He has been a guest at over 150 colleges and universities worldwide, including twenty different countries and across the US including the Central Conservatory of Beijing, the Conservatories in Rio de Janeiro, and the Paris Conservatoire in France.

During the 2014-2015season, his Symphony No. 1, The New Eastern World Symphony, was premiered by the ShenZhen Symphony in China. The Boise Philharmonic performed his Tenor Saxophone Concerto, and the Anchorage Symphony premiered his Double Concerto for Violin, Cello and Orchestra. His music was featured at the 2014 National Flute Association Convention in Chicago, the 2014 International Horn Society Convention in London among others.

He has been Vice-President with the League of Composers-International Society of Contemporary Music. He received the Bachelor of Music Degree from the Eastman School of Music in 1976, and masters and doctorate degrees from Juilliard in 1978 and 1980, where he teaches music theory in the College Division, and composition in the Pre-College Division.

Brass Quintet from the Houston Symphony: