The Rodland Duo: Carol and Catherine 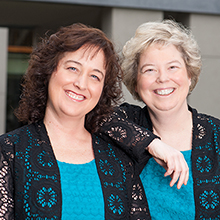 The daughters of professional musicians, the Rodland sisters began making music together as children. Their individual careers as award-winning performers and teachers have taken them all over the world, and they began performing together professionally as the Rodland Duo in 2002. Recent Rodland Duo performances have included recitals at the Luna Nova New Music Festival in Memphis, TN, at the 38th International Viola Congress in Cincinnati, OH, at Indiana University, the University of Michigan, and the University of North Carolina School of the Arts.

Actively engaged in commissioning new works for their unusual combination of instruments as well as creating their own arrangements of existing compositions, their repertoire ranges from the Baroque to the contemporary. Critics have called The Rodland Duo’s performances “stunning” and “beyond praise.” American Weavings, their recently released recording on the Crystal Records label, led Gramophone to declare viola and organ “an awesome combination.”

In addition to their active performing careers, they are both dedicated teachers: Carol is Professor of Viola at the Eastman School of Music in Rochester, NY, and Catherine is Artist in Residence in organ and theory at Saint Olaf College in Northfield, MN. Their numerous individual accolades include top prizes at international competitions, such as the Washington International Competition, the Artists International Auditions, the AGO National Competition, and the University of Michigan Organ Competition. For further information please visit www.concertartistcooperative.com and www.carolrodland.com.

Adolphus Hailstork received his doctorate in composition from Michigan State University, where he was a student of H. Owen Reed. He had previously studied at the Manhattan School of Music, under Vittorio Giannini and David Diamond, at the American Institute at Fontainebleau with Nadia Boulanger, and at Howard University with Mark Fax.

Recent commissions include Rise for Freedom, an opera about the Underground Railroad, premiered in the fall of 2007 by the Cincinnati Opera Company, Set Me On a Rock (re: Hurricane Katrina), for chorus and orchestra, commissioned by the Houston Choral Society (2008), and the choral ballet, The Gift of the Magi, for treble chorus and orchestra, (2009).

Hailstork’s newest works are Robeson, an operatic theater work (written for the Trilogy Opera Company of Newark, New Jersey), and Hercules (“the veriest dandy slave”) a concert overture for the Grand Rapids Symphony which was premiered this past October (2014).

Dr. Hailstork resides in Virginia Beach, VA, and is Professor of Music and Eminent Scholar at Old Dominion University in Norfolk.